Hands On With The Nokia Lumia 1020 At GDGT During SDCC! 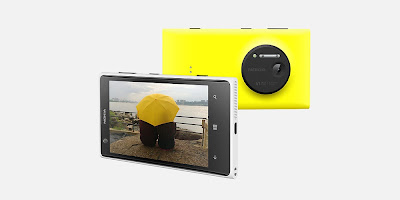 This year during the San Diego Comic Con, Engadget held a GDGT Live meetup at Stingaree. Among many of the sponsors, Nokia what there showing off the Lumia 1020! So I did what any full blooded geek would do, I asked if I could play with it!!! After a few minutes, I realized that this is the best camera phone on the market and could easily replace most point and shoot cameras!
All the Nokia reps had the yellow variants on them, more than willing to show off that beautiful 41MP goodness. Some even with matching battery grips. I talked to 3 different reps and was shown a different feature from each one.

The first young lady actually was willing to let go of the 1020 to allow me to compare it to my Lumia 900. I was shocked to learn they weighed nearly the same, with the 1020 being slightly larger. After than, it was off to play with the camera portion. What I saw blew me away. She had a few demo shots from the top floor of their New York hotel when they unveiled the 1020. besides being an ultra crips image, I was nearly able to zoom to street level with little to no pixelation. Just a bit more and I would be able to read the license tag on the taxi below! To make sure that it wasn't a "mock up" image, we took 1 shot with similar results.

She was also able to show me the camera grip accessory, which while adding some size, did give you a new shutter button as well and an additional battery. To sweeten the deal a bit more, a tripod mount is also included.

The second rep, showed me some of the image manipulation features and video recordings. Imagine the image stabilization of the Lumia 920 and add  super clear 1080p capture and well, I was starting to have doubts about my DSLR that I was lugging around!

The 3rd rep focused on the Pro Camera software, and pro it was. Almost every feature on my DSLR, from ISO to Apeture settiings were available! Nokia is obviously the master of the Windows Phone 8 system!


As I left, a parting gift of a Magenta DC-16 USB battery tube was handed to me, just in time as my Lumia 900 was already in battery saver mode! If you are looking for a good battery, the DC-16 took my phone from 10% to 90% and it wasn't even fully charged!