Review: Time And Eternity For The PlayStation 3 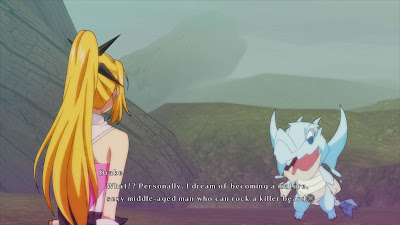 Time and Eternity, from Namco Bandai/Imageepoch and distributed by NIS America had a lot going for it. Sharp HD hand drawn graphics, a 30-40 hour story, a very anime feel, and a Working Designs-ish script. So what went wrong?

Story:
Toki is preparing for the wedding of her dreams to the Knight Zach. All seems to be going great when suddenly, assassins attach the the bride and groom at the altar! While attempting to protect Toki, Zack is mortally wounded. This is when he first meets Towa, a second soul that resides in Toki's body. After Towa defeats the assassins, and a brief conversation with Zach, Toki and Towa transport themselves to 6 months before the wedding to figure out why this attack took place. Unknowingly, Zack's soul went along for the ride, landing in Drake, Toki/Towa's pet dragon.

Not the most complex of stories, but different than the standard "Save the Princess" or "Maiden" JRPGs tend to go with.

For me, the game's English translation is a high point. If anyone played any of Working Design's TG-16, Sega CD or Playstation One titles, the translation lines up with them.Strange and quirky, yet it fits. 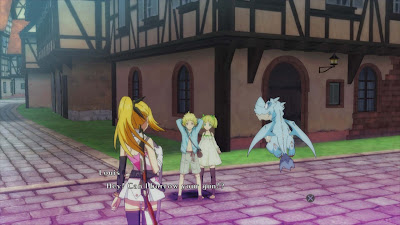 Music:
Very late 80's early 90's anime style of music. While not Final Fantasy in scale, it fits the action on screen! 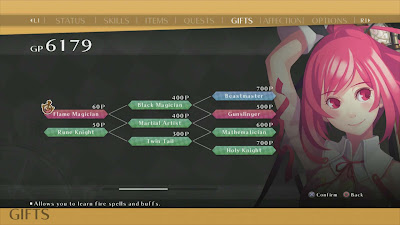 Graphics:
While the game looks great in stills, every character could easily use another 15 frames of animation. I'm not sure if it's a memory issue with the PS3, but the animations seemed a bit rough. Most noticeable is Drake, whose wing flaps use 3 or 4 frames only.

Another thing that irks me graphically is something most similar games do. The anime style and colors used for the characters is not reflected on the game's world at all. If the same palette was used for both the characters and environments, the game would/could have felt more like a LaserDisc game or an anime title.

Also, there seems to be a lack in the variety of enemies. The 1st 10 hours had me battling different color variations of 4-5 different enemies.

Controls:
While it may fel like an HD version of an old LaserDisc game, the controls are a lot more precise. I have been able to easily dodge attacks as long as I'm not mid-move, and I can attack right when I hit the button. Unlike traditional JRPGs,  you can attack at any time, but you have to wait for your gauge to fill up to use special moves and magic. This goes for your enemy as well, but there is only so much intelligence in a golem or what appears to be a chicken, so some of them will just wait to use  special attack.

Misc:
A few other things worth mentioning. Toki and Towa switch souls automatically after every level up.  While similar, Toki is much better with her gun while Towa is better up close and personal. You can switch between the 2 using a pepper.

There are quite a few quests and side quests. Here's a small hint. Somehow hamsters are nautical masters, capable of navigation off their small island to far off lands. DO NOT SPEND YOUR TIME LOOKING FOR ALL 7 HAMSTERS ON THE SAME ISLAND.

Your affection towards Toki and Towa shift based off your actions in combat and cutscenes. Your best bet, stock up on peppers if your wish to favor 1 over the other.

Overall:
There was SOOOOO much going for this game. So many possibilities. but Namco Bandai dropped the ball. Despite it's shortcomings, Time and Eternity does have a nice feel and a long story while not being hard. A great game for introducing JRPG's to new fans.

While far from perfect, Time and Eternity is not a bad game.