Mad Catz Annouces Its Force Feedback Steering Wheel For The Xbox One! 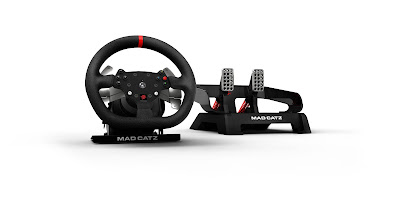 Mad Catz just announce that they will be releasing a force feedback wheel for the Xbox One. They a stating a "Holiday 2013" launch, but are trying to be there at the Xbox One launch. No price has been announced yet, but considering it's look, Forza players may need to shell out a bit more....

Slightly unrelated.... I still have my Dreamcast Mad Catz Wheel... and it still works!

Full PR after the break!
From Mad Catz:


Mad Catz® Announces The Force Feedback Racing Wheel for Xbox One™
Advanced Racing Wheel Brings Professional Build Quality and Customization to Next Generation Gaming
San Diego – August 21, 2013 – Mad Catz Interactive, Inc. (“Mad Catz”) (NYSE MKT: MCZ) announced today the Force Feedback Racing Wheel, a premium quality racing game controller for the Xbox One console.
Designed to offer a highly authentic gaming experience, the genuine suede leather steering wheel houses a raft of technology, such as twin next generation Force Feedback motors and a luxury CNC anodized aluminum wheel face which can be removed from the wheel base should gamers wish to replace or upgrade in the future.
“As we approach the Holiday season, excitement continues to mount for Xbox One and we’re pleased to announce our second premium product for the console” said Darren Richardson, the President and Chief Executive Officer of Mad Catz Interactive, Inc.  “We have previously commented on how the enhanced performance of Xbox One opens up additional scope for innovation and believe that the precision engineering and customization of the Force Feedback Racing Wheel will appeal to the passionate racing gamer.”
Ideal for use with software such as Forza Motorsport® 5, the Force Feedback Racing Wheel ships with a fully adjustable Pedal Set, allowing gamers to adjust the spring resistance, height and spacing on the gas and brake pedals.
The Xbox One home entertainment system from Microsoft is expected to launch Holiday 2013.