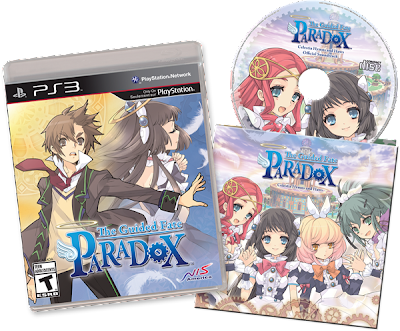 Before you run out and buy your new Xbox One or PS4, remember your current console still needs love. NIS has you covered with "The Guided Fate Paradox". November 5th is the day this game will hit stores, giving your soon to be neglected PS3 a bit more playtime.

Read the full PR after the break!
From NIS America:

The Guided Fate Paradox to shine heavenly light upon North America and Europe this coming November!

Santa Ana, Calif. (August 20, 2013)– NIS America announced today that The Guided Fate Paradox™ is set to release on November 5 in North America and October 25 in Europe, exclusively on the PlayStation®3 computer entertainment system!

Created by the same development team as Disgaea: Hour of Darkness, The Guided Fate Paradox is the spiritual successor to Z.H.P. Unlosing Ranger Vs. Darkdeath Evilman – an extremely approachable roguelike RPG. The Guided Fate Paradox continues in the same vein with a fresh and unique approach towards the roguelike genre, with a memorable cast of characters, a compelling story, tons of customization, and seemingly infinite replayability.

About the game:
Players take on the role of high school student Renya Kagurazaka who has become a god by winning a lottery in a mall! Renya must travel through the Copy World in order to affect changes in the Original World and make people’s wishes come true. But is there some other force at work?

• 3D randomly generated dungeons offer floor after floor of surprises! Don’t be afraid to die, you’re God! The levels you gain while dungeon delving will help boost your stats!

• Hi-resolution 3D sprites offer sublime visuals while you ogre through the game’s ethereal dungeons! You won’t be alone though, angels are by your side!

• Disgaea - inspired over-the-top special attacks allow you to crush your enemies with creativity drizzled with a slight hint of levity!