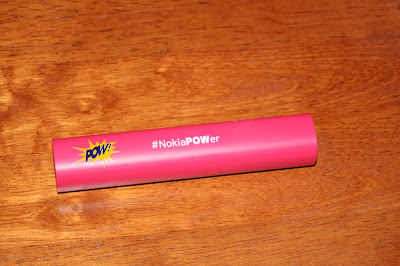 During this year's San Diego Comic Con, Engadget threw a GDGT event where Nokia was present. There I was given a near fully charged "POW! #NokiaPOWer" branded DC-16 battery. Just in time as my phone, a Lumia 900, was in battery saver mode!

So, how did Nokia's little gift do?
The DC-16 is a 2200mAh battery with a full side USB jack on one end and Micro USB jack on the other. You use the full size jack to charge your device and the micro jack to charge it. At 2200mAh you get enough juice to charge most phones once. Withing about an hour and a half, my Lumia was at 85% battery. The next day, a friend's Motorola Droid 3 went from 0% to 80% in about an hour, while being used the whole time.

You can get this little gen from AT&T for around $35!

Now, there are 2 downsides..

First, No idea how I got a pink one (Nokia says its magenta) and it's cylindrical. Depending on your circle of friends, this could cause some really bad jokes.

Rating?
If Nokia could of squeezed more power out of the DC-16 it would be perfect!
#engdgtSD #nokiaPOWer 2013 SDCC Battery DC-16 gdgt Nokia San Diego Comic Con SDCC USB