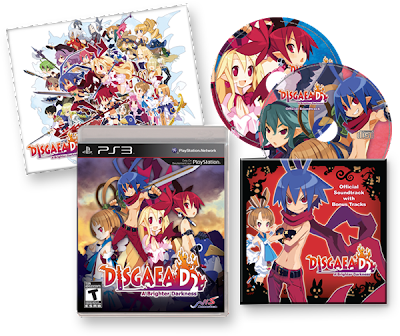 For the fans of Japanese, over-the-top, strategy RPGs, NIS America has answered your dilemma of having too much free time on your hands! We have been playing the game for over a week now preparing for an upcoming review,  but alas, we don't have copious amounts of free time available!

For $49.99, you can pick this great game as pictured above, or JUMP and for $89.99 grab the Limited Edition, which is all kinds of awesome!

read the full PR after the jump
From NIS America:


DISGAEA D2: A BRIGHTER DARKNESS
HITS NORTH AMERICA TODAY!
Santa Ana, Calif.(October 8, 2013)– NIS America is thrilled to announce that the newest installment of the fan-favorite strategy RPG series, Disgaea®D2: A Brighter Darkness, is now available for purchase across North America on PSN and at retail stores. Celebrating the 20th anniversary of Nippon Ichi Software and 10th anniversary of the Disgaea series, Disgaea D2: A Brighter Darkness brings back the popular trio from the first game:Laharl,Etna, and Flonne! With a completely new storyline, it offers game system refinements that will entice new players, while still offering the same kind of hardcore, over -the-top, endless gameplay that is sure to please longtime fans! Disgaea D2: A Brighter Darkness will also feature various DLC to keep players entertained for even more sleepless nights this fall!
For more information, please visit disgaea.us/dis_d2
About the game:
The Netherworld– a place where might makes right and today’s friends are tomorrow’s  enemies. After a long journey with many ups and downs, Laharl finally finds himself as a
full- fledged Overlord. However, the other denizens of the Netherworld do not see him as
such, so he sets out on a journey with his loyal(!?) vassals to receive the respect he deserves. Along the way, Laharl will meet a girl who claims to be his sister, fight demons with bigger than usual chips on their shoulders, and find out that even his own body holds a few surprises for him...

Key features:
Enhanced Customization:
The character creation system has been completely revamped to allow for the highest level of character customization in series history!
Master/Pupil System: The player chooses the master and the pupil, as well as which skills to learn! Benefits include new skills and higher weapon proficiencies for the pupil, while the master gets a stat boost!
Item World: Challenge this battleground to power up your weapons, items, and characters! Prepare to deal massive damage!
Geo Panels: These status-altering blocks provide bonuses or detriments to the terrain! Change the tide of battle by skillfully manipulating these elemental icons! Reunite with old friends and meet a new crew: Bringing back the fan favorite trio of Laharl, Etna, and Flonne, with new characters and a brand-new story!