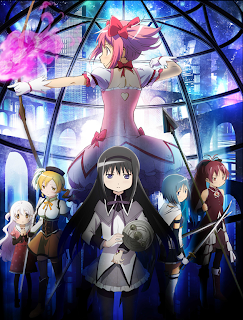 We here at the Grotto are always extremely happy when an anime title gets a theatrical release, but, at least for us here, our home theater surpasses our closest theater showing Madoka by leaps and bounds. Others will have some much better options to watch this. From the looks of it, it will be mostly art house and independent theaters.

Either way, support this so we can have more titles theatrically!

See if you can watch it on the big screen here: MadokaMagicaUSA.com/rebellion

Full PR and after the break
From Aniplex USA:


Theatrical Release starts with Premiere Event in Los Angeles followed by major cities in the U.S. and Canada

SANTA MONICA, CA (October 14, 2013) – The highly anticipated animated movie, Puella Magi Madoka Magica The Movie –Rebellion-, the third installment of the series, will be coming to theaters just in time for the holidays. Following the release of the first two movies on Blu-ray, Aniplex of America has just announced that Puella Magi Madoka Magica The Movie –Rebellion- will debut in the U.S. and Canada this December.

Madoka Kaname has changed the world. In this new world, is what the magical girls see a world of hope… or despair? Featuring a brand new story written by Gen Urobuchi (Fate/Zero, Psycho Pass) of Nitroplus, the original storyline begins after the events of Part 2: “Eternal”. With an all new story and original animation set for the big screen, there is no doubt that the movie will provide a new experience for both fans who have enjoyed the previous movies, and those who are just seeing Madoka Magica for the first time.

To celebrate this special occasion, Aniplex of America will host a US Premiere Event on December 3rd at the Egyptian Theater in Hollywood, CA. This is a unique opportunity for fans to be the first to watch the Madoka Magica movie as well as experience a visit from production crew members.

Additionally, those who purchase a U.S. Premiere ticket will receive a exclusive gift bag which includes a Madoka Magica mini autograph board, the movie guide book and a Kyubey cell phone stand. Exclusive Madoka Magica the Movie merchandise will also be on sale at the event. Tickets for the US Premiere Event go on sale on Tuesday, October 15th at 10:00AM PST at MadokaMagicaUSA.com/rebellion.

Following the US Premiere, ELEVEN ARTS will distribute the film to select theaters in major cities across the US and Canada. Each admission ticket will give the fans a chance to receive an exclusive mini autograph board while supplies last. There will also be exclusive Madoka Magica merchandise sold only at the Los Angeles theater, Downtown Independent while supplies last. The official release of the film is on December 6th. Ticket will go on sale beginning October 15th. For information regarding when tickets become available for purchase, please refer to the theater’s websites.

For a complete list of showtimes and merchandise information, please go to
MadokaMagicaUSA.com/rebellion

About Puella Magi Madoka Magica The Movie Rebellion
Madoka Kaname is a magical girl who sacrificed her very existence to set every magical girl free from their cruel destiny. Homura Akemi is another magical girl who still dreams of the day she can finally see Madoka once again. Were all the magical girls truly saved from despair? Now… the great “Law of Cycles’ leads the magical girls to their new fate. This third film will once again bring together the extraordinary members of the Madoka creative staff. Led by chief director Akiyuki Shimbou, the script will be written by Gen Urobuchi from Nitroplus and the original character concept designs will be by aokiumi. SHAFT will once again be the studio that will be bringing their work to life. With a completely new screenplay and new animation Puella Magi Madoka Magica The Movie –Rebellion- is a brand new tale of magical girls.