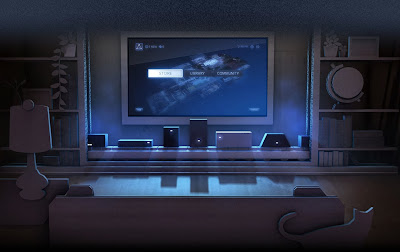 Valve has let loose the specs for the beta Steam Machines and WOW! We are talking mix specked units, from i3 to i7 CPUs and Nvidia TITAN to GTX660 GPUs. These will run the gamut of the current mid to high end PCs and will give Valve and users a better understanding on what you will need to play your PC games in the livingroom!

Remember, only 300 beta testers have a shot at these.... and we are hoping we get one.

Read the FULL PR after the break
From Valve:

Hello from the Steam hardware bunker.

Thanks for joining the Steam Universe community group. As we get closer to shipping the prototype Steam Machines and controllers we talked about last week, we're going to be posting info here about what we're up to, and give you some insight into the work we’ve done to get to this point.

As we talked about last week, the Steam Machines available for sale next year will be made by a variety of companies. Some of those companies will be capable of meeting the demands of lots of Steam users very quickly, some will be more specialized and lower volume. The hardware specs of each of those machines will differ, in many cases substantially, from our prototype.

Valve didn't set out to create our own prototype hardware just for the sake of going it alone - we wanted to accomplish some specific design goals that in the past others weren't yet tackling. One of them was to combine high-end power with a living-room-friendly form factor. Another was to help us test living-room scenarios on a box that's as open as possible.

So for our own first prototype Steam Machine ( the one we're shipping to 300 Steam users ), we've chosen to build something special. The prototype machine is a high-end, high-performance box, built out of off-the-shelf PC parts. It is also fully upgradable, allowing any user to swap out the GPU, hard drive, CPU, even the motherboard if you really want to. Apart from the custom enclosure, anyone can go and build exactly the same machine by shopping for components and assembling it themselves. And we expect that at least a few people will do just that. (We'll also share the source CAD files for our enclosure, in case people want to replicate it as well.)

And to be clear, this design is not meant to serve the needs of all of the tens of millions of Steam users. It may, however, be the kind of machine that a significant percentage of Steam users would actually want to purchase - those who want plenty of performance in a high-end living room package. Many others would opt for machines that have been more carefully designed to cost less, or to be tiny, or super quiet, and there will be Steam Machines that fit those descriptions.

Here are the specifications for Valve's 300 prototypes.

As a hardware platform, the Steam ecosystem will change over time, so any upgrades will be at each user's discretion. In the future we'll talk about how Steam will help customers understand the differences between machines, hardware strengths and weaknesses, and upgrade decisions.

We aren't quite ready to post a picture of our prototype - just because they're not finished enough. Before they ship we'll let you know what the prototype looks like. And we expect people to redesign the machine, too. Both from a technical perspective, deciding on different components, and from an industrial design perspective, changing the enclosure in interesting ways.

So high-powered SteamOS living room machines are nice, and fun to play with, and will make many Steam customers happy. But there are a lot of other Steam customers who already have perfectly great gaming hardware at home in the form of a powerful PC. The prototype we're talking about here is not meant to replace that. Many of those users would like to have a way to bridge the gap into the living room without giving up their existing hardware and without spending lots of money. We think that's a great goal, and we're working on ways to use our in-home streaming technology to accomplish it - we'll talk more about that in the future.

Stay tuned for some closer looks at the Steam Controller.