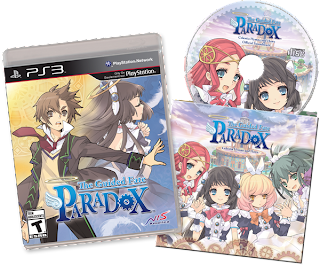 Well, a review is coming for this, once I finish Disgaea D2. So little time available, yet NIS loves giving you games that can easily span 100+ hours! How can one fit 40+ hours in day to play NIS goodness? Seriously, I need to know!

Read the full press release after the break
From NIS America:


The Guided Fate Paradox is now available
across North America!

Santa Ana, Calif. (November 5, 2013)– NIS America is proud to announce that The Guided Fate Paradox™ is now available for purchase across North America in both retail form and on PSN. Created by the same development team as Disgaea®: Hour of Darkness, The Guided Fate Paradox is the spiritual successor to Z.H.P. Unlosing Ranger vs. Darkdeath Evilman–an extremely approachable and story- driven roguelike RPG. The Guided Fate Paradox continues in the same vein with a fresh and unique approach toward the roguelike genre, with a memorable cast of characters, a compelling story, tons of customization, and almost infinite replayability.

About the game:
Players take on the role of high school student Renya Kagurazakawho has become a god by winning a lottery in a mall! Renya must travel through the Copy World in order to affect changes in the Original World and make people’s wishes come true. But is there some other force at work?

Features:
• In-depth customization featuring off-the-wall armor, weapons, and more. Want tank treads for legs? Or maybe a fish head instead? Well, there you go!
• 3D randomly generated dungeons offer floor after floor of surprises! Don’t be afraid to die—you’re God! The levels you gain while dungeon-delving will help boost your stats!
• Character design is brought to life by the beautiful artwork of Noizi Ito (The Melancholy of Haruhi Suzumiya and Shakugan No Shana)
• Hi-resolution 3D sprites offer sublime visuals while you ogre through the game’s ethereal dungeons! You won’t be alone though—angels are by your side!
• Disgaea-inspired, over-the-top special attacks allow you to crush your enemies with creativity drizzled with a slight hint of levity!