Injustice: Gods Among Us Now Available On Android! 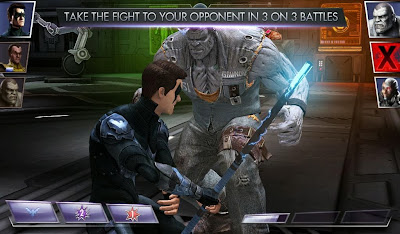 After being available forever on IOS, Android fans can now take on their favorite DC characters! While of course the game would be different from the console versions, it does look great. The game also seems to add a collectable card aspect.

You can grab it from the Play Store

Read the full press release after the break
From Warner Brothers Interactive Entertainment:


Warner Bros. Interactive Entertainment Launches
Injustice: Gods Among Us for Android
Top-Rated Mobile Game Now Available As a Free Download on Google Play
And Coming Soon to the Amazon Appstore
BURBANK, Calif. – Nov. 21, 2013 – Warner Bros. Interactive Entertainment and DC Entertainment today announced that its popular Injustice: Gods Among Us mobile game is now available on Google Play™ and is coming soon to the Amazon Appstore for Android.  Already available from the App Store on iPad, iPhone and iPod touch, this free-to-play title has already garnered more than 16 million installs to date and a player rating of 4.5 out of 5 stars.
Developed for iPad, iPhone and iPhod touch by award-winning NetherRealm Studios, and brought to Android by Virtuous, Injustice: Gods Among Us features a collectible card mechanic and engages players in 3-on-3 tag team combat that pits many of DC Comics most popular icons such as Batman, Superman, The Flash, Wonder Woman, Green Arrow, Aquaman and more against one another.  Fans who also own the PlayStation®3 computer entertainment system and Xbox 360® games and entertainment system versions will be able to unlock content in the console versions that is available in the mobile game, and vice versa, by registering for a Warner Bros. ID (WBID) account and playing the game.
The console version, Injustice: Gods Among Us Ultimate Edition, is now available in North America for PlayStation®4 computer entertainment system, PS3™ system, PlayStation®Vita handheld entertainment system, Xbox 360 and Windows PC.
For more information and the latest updates, visit www.injustice.com or find us on Facebook at https://www.facebook.com/injusticegame.

android Gods Among Us Injustice