Well folks, a game that many thought would never arrive in the US is upon us. While most gamers are waiting for the Friday release of the Xbox One and this past Friday's release of the PlayStation 4, XSEED Games is giving us a fun and super fan service laden game. Today, we tell you what we thought of Senran Kagura Burst!

Read our full review after the break!

Where to start? Senran Kagura is a VERY story driven side scrolling brawler staring a cast of very well endowed, female ninja. The game is the followup that not only includes the original Senran Kagura staring the girls from Hanzo Academy, but also their "evil" counterparts from the Hebijo Clandestine Girl's Academy as well. Developed by Tamsoft, the minds that created the classic Toshinden series, the PSP Ikki Tousen games, and much more, Senran Kagura Burst plays like a 3D version of Tamsoft's PSP Ikki Tousen games.

XSEED Games has released Senran Kagura Burst in almost raw form. In game text has been translated into English, but everything else is a purist's dream. From the untouched animation to listening to everyone speak in their native Japanese, this seems more like a gift to the fans. If something has been cut, I haven't noticed, but I have not played the original. 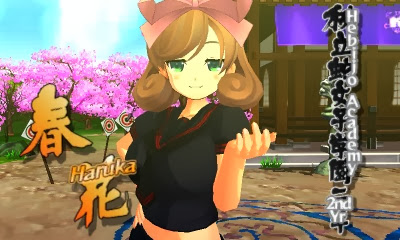 Graphics:
The graphics in this game will not blow your mind one bit. When playing, it's VERY easy to loose where you are at. The game doesn't really slow down that i can notice, but everything has a very low polygon count, reminding me of the Sega Saturn/PlayStation era.... Until you pull of a transformation. The modeling here is much better, and more "round". 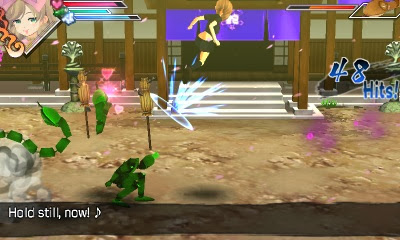 This is where some slight disappointment sinks in. While graphics are not everything, nor should they be, there is a HUGE gap between the look of the "Dressing Room" and transformations that the actual game itself. Not sure if it was a limitation of the 3DS or the programming in general.

Sound:
Clear and sharp. Nothing really stood out, but it wasn't bad. Voices were all clear, and understandable if you understood Japanese!

Gameplay:
Now here is where the game redeems itself. All the missions are not too long and some can easily be completed during a commercial break on  your favorite show! It's a simple formula, beat everything up until there is nothing left. Much like the PSP Ikki Tousen games, you go from one direction to another and stages are complete when you are the last ninja standing. Action is broken up by full screen transformation animation and special moves. 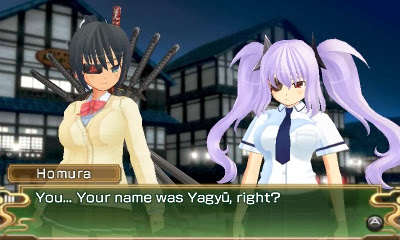 Earlier I did mention the game is very story driven. Well, before and after each mission, you get either some character insight, dialog between characters, back story, scenario setup, or a combination of all of the above! Sometimes they are very short, other times VERY long ranging from 5-15 seconds to couple of minutes of text, voice and pictures..

Everything Else:
Well, I did mention the game is full of fan service and here I will explain what you get! When in the dressing room or transformations, there is a DOA level of breast and read jiggle. Even the not-so-well endowed characters go through this jiggly effect. Also, transformations start with your character's clothes disappearing, leaving them in bathing suits, bikinis, lingerie, etc,  and their shinobi attire popping into place, causing more chest/rear jiggle. You can also activate a special mode at the beginning of any mission, leaving you to fight in your under garments only! This allows for you to dish out more pain, at the cost of less defense ability. 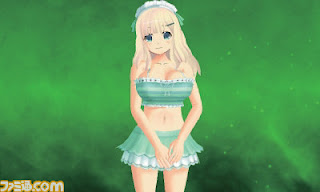 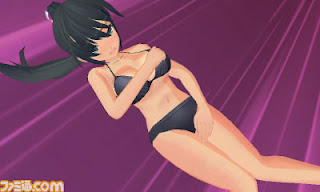 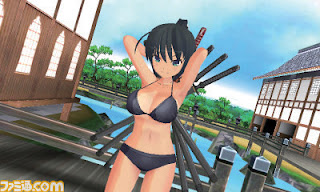 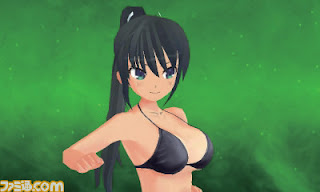 Now for the dressing room. The sole purpose of the dressing room is for you to see you character in various costumes you unlock along the way. That also includes the girls in various stages of undress with full jiggle in effect. The chest and rears react to the control of the camera, with them saying things like "what are you looking at", "what are you doing this", "this is embarrassing" and more. One thing to be clear about. There is NO NUDITY in the game. The "partial nudity" mentioned is similar to edited nudity on Japanese TV. You you will have convenient clouds, smoke, obsticals, etc.  No matter how close the cast gets to it, which is fine as that is not the point of the game.

While not the best in the genre, this is not a bad game at all. If you like a game with some good story elements, beating things up, and a hint of perv, this is for you!

Now to see if Senra Kagura Shinovi Versus for the Vita gets US release.