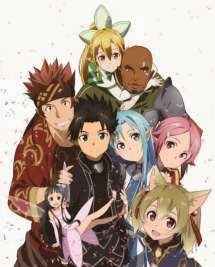 Just in time to end the year, Aniplex of America has announced that the Sword Art Online special will simulcast worldwide. In the US, we can watch on Crunchyroll or Daisuki.net!

Full press release after the break

* Please check with streaming website for exact start time. Please be advised that these sites will not be available for viewing in Japan.

About Sword Art Online EXTRA EDITION
Kirito and the others decide to go on an underwater quest within the world of ALO to grant Yui her wish to see a whale. As they all prepare for the quest, they face a shocking revelation… Leafa, or Suguha is afraid of water. So, Asuna and the other female members decide to teach Suguha how to swim at a pool in the real world. Meanwhile, Kirito was meeting somebody…