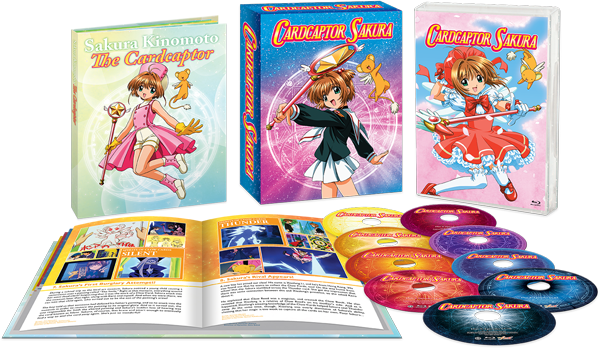 NIS just announced that the popular Cardcaptor Sakura will release the August 5th in a Blu-Ray box set!!!

Read the full PR after the break

CARDCAPTOR SAKURA TO BE RELEASED IN BOTH PREMIUM AND STANDARD EDITION FORMATS THIS AUGUST!

Santa Ana, CA (April 30, 2014) – NIS America is excited to announce that the highly praised hit anime CARDCAPTOR SAKURA Complete Series will be released on August 5 across North America in Premium and Standard Edition versions. All versions will be available simultaneously at online retailers, and will offer a bonus English dub. The Premium Edition version will include 70 episodes on a 9 metallic gloss Blu-ray disc set, with a fully illustrated 76-page hardcover art book packed with new content/illustrations and a collectible slipcase.

About the show:
Ten-year-old Sakura lives a pretty normal life with her older brother, Toya, and widowed father,
Fujitaka.  At least she did, until the day she returned home from school to discover a glowing book in her father’s study. After opening the book and releasing the cards within, Sakura is tasked with collecting each of these magical cards, while trying to live the life of a normal fourth grader. In the monumental task of collecting all the cards, Sakura must rely on her friends and family, and decide
what she finds most important in life.