Monster Monpiece Will Be Released On May 27!

Monster Monpiece is coming.... The collector card game, the same that caused some fans to go nuts in January when it was announced that some 40 sexually explicit or inappropriate for US and EU eyes would be removed, is set to drop later this month on PSN for $29.99

You can read the full press release after the break
From Idea Factory International:


MONSTER MONPIECE WILL BE DIGITALLY RELEASED ON MAY 27 AND MAY 28
ON PLAYSTATION VITA TO NORTH AMERICAN AND EUROPEAN FANS!

LOS ANGELES, CA., May 9, 2014 -Idea Factory International is excited to announce today that its first PlayStation®Vitahandheld entertainment system title, Monster Monpiece™, will be released in digital format via PlayStation®Networkon May 27 for the North American market and on May 28 for the European market. Monster Monpiecewill be available to purchase for $29.99.

Monster Monpieceis a card-battling strategy game with light RPG elements, providing a simple yet strategic card-based battle system with a charming story. Monster Monpiecealso supports Ad-hoc and Network multiplayer game modes, so you can test your customized decks against other players online!

Story
God's hammer struck twice, punishing the world of Yafanielbelow...
In the world of Yafaniel, humans and an unusual species called “monster girls” coexist. May Esperio, an Academy student from Kunaguva, is training hard to become a "master" of monster girls with her best friends, Elzaand Karen. However, after an encounter with a mysterious stranger, Elzabecame “Lost”, a victim of a strange affliction that plagues both humans and monster girls. Elzaand the monster girls in her service have begun stealing the Magus Quartzes that are held in each of Yafaniel'smajor cities. May decides to travel the world pursuing Elzain an attempt to cure her. However, May knows that if she fails to save Elza, the whole world may be destroyed! 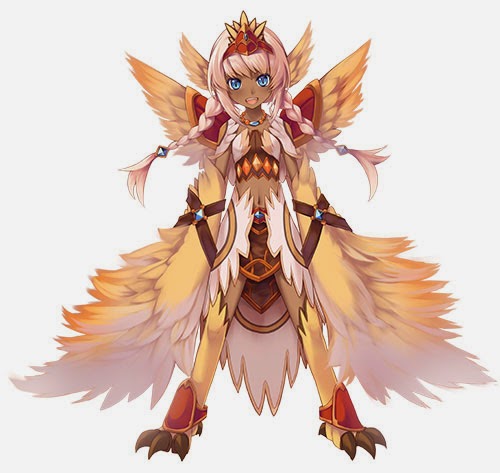 Key Features
Likeable characters and a story rife with adventure! With a wide range of unique and quirky personalities, each member of the Monster Monpiececast adds a little spice to the adventurous story from beginning to end!
Use Skills, Potentials, and a strategic mind! While the battle system seems simple, you still need your wits about you in order to best utilize your Monster Girls’ Skills and Potentials in battle!
Fusion and Aura Bonus kick battles up a notch! The keys to a successful battle lie in mastering the Fusion system and activating the Aura Bonus to increase your cards’ stats during battle!
Card battles featuring 3D chibicharacters! There are more than 100 Monster Girls that will support you in battle against your opponents. Once summoned to the battle field, they will pop up on it as vibrant 3D chibicharacters!
First Crush ❤Rub Level up your Monster Girls (battle cards) with the First Crush ❤Rub mode, where you send your magic power into the cards by rubbing the touchscreen!