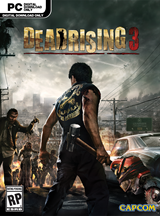 Starting with Dead Rising 3 for the PC and ending with Monster Hunter 4 Ultimate on the 3DS, Capcom has released what will be playable next week at E3!

Read the full press release after the break
From Capcom:

SAN MATEO, Calif.  – June 5, 2014 – Capcom, a leading worldwide developer and publisher of video games, today announced new titles for its upcoming lineup and confirmed its roster of playable titles to be shown at the 2014 E3 Expo® in Los Angeles. Newly announced titles include Dead Rising® 3 for PC, Monster Hunter Freedom Unite™ on the App Store℠, and Phoenix Wright®: Ace Attorney® Trilogy for Nintendo eShop on Nintendo 3DS™. These along with Ultra Street Fighter® IV for PlayStation®3 computer entertainment system, Xbox 360 games and entertainment system from Microsoft and PC and the debut of Monster Hunter™ 4 Ultimate for Nintendo 3DS will be playable at Capcom’s booth at the LA Convention Center next week. E3 will also serve as a ranking event in the Capcom Pro Tour, the previously announced Street Fighter® focused fighting game league.

Capcom’s full roster of titles on display at its booth #2001 in the South Hall of the LA Convention Center includes:

Dead Rising 3 (PC):
The critically acclaimed Dead Rising 3, an exclusive launch title for Xbox One, the all-in-one games and entertainment system from Microsoft, will be available for PC digital download on Steam globally and a retail version for Windows PC in Europe in Summer 2014. PC gamers will be able to experience the hordes of horror at high PC resolutions with fully optimized visuals for the wide screen, upgraded textures on characters, backgrounds and in-game objects. Dead Rising 3 for PC will include Steam platform support with Steam Achievements, Steam Cloud, Steam Trading Cards, global leaderboards and full game controller support. Also compatible with the keyboard and mouse, players will be able to toggle back and forth between the two in real time.

Monster Hunter 4 Ultimate (Nintendo 3DS):
Launching on Nintendo 3DS in the west in early 2015, Monster Hunter 4 Ultimate will be the newest installment in the popular Monster Hunter™ series. Players will take on the role of a hunter on a grand adventure with a traveling caravan visiting several new locales with hundreds of quests to be cleared on the way. For the first time ever for the Monster Hunter series on a handheld system, players will be able to join up with friends over the internet via the Nintendo Network™, as well as the previously available local wireless option. The game will introduce an expanded action set including more vertical and lateral movement, fluid climbing motions, and ability to ride atop monsters. Monster Hunter 4 Ultimate also debuts two weapon classes, features new and returning monsters, and spans more locales for the most robust hunting experience than ever before.

Monster Hunter Freedom Unite (iPhone®, iPod touch®, iPad®, iPad mini™, and iPad Air™):
One of the most popular PSP® (PlayStation®Portable) system titles arrives on the App Store! Monster Hunter Freedom Unite™ was based on Japan’s Monster Hunter Portable™ 2nd G and originally released in 2009 in the west. The PSP® (PlayStation®Portable) system title was a global success with sales of more than four million units worldwide, contributing to the series’ total of more than 28 million units to date. From devising the strategy to executing the attack, players will need to work together in order to hunt down ferocious beasts and progress through the wide range of quests on offer. Players will be rewarded for their use of deep fighting combat systems, encouraging them to seek out the more experienced hunters and team up in order to learn from their expertise. Several features have been added for the new version including: higher HD resolution graphics, touch screen optimized controls, target camera options, support for MFi controllers and seamless co-op multiplayer quests via Wi-Fi connection for up to four hunters.

Phoenix Wright: Ace Attorney Trilogy (Nintendo eShop on Nintendo 3DS):
Defend the innocent and save the day! Courtroom hero Phoenix Wright lays down the law this winter in the digital release of Phoenix Wright: Ace Attorney Trilogy. Experience the original trilogy like never before in clear, high-resolution re-drawn graphics and immersive 3D visuals optimized for the Nintendo 3DS system. Join rookie lawyer Phoenix Wright through the early years of his career in his quest to find the truth behind all of the classic cases! Prepare for intense courtroom showdowns by investigating crime scenes, collecting evidence, and questioning witnesses. Use evidence and the testimonies of witnesses to your advantage as you battle for the innocence of your client. Nothing less of a full acquittal will do in this court of law. Find the contradictions in witnesses' testimonies to expose the truth!

Ultra Street Fighter IV (PS3™, Xbox 360 and PC):
In Ultra Street Fighter IV, Poison, Hugo, Elena, Rolento and Decapre join the fight, complete with new animations and their own unique play styles, bringing the final roster count to a massive 44 characters. Six new battle environments (including Pitstop 109, Cosmic Elevator, Half Pipe and more) provide a thrilling and colorful backdrop to the action. Direct fan feedback was gathered on all of the original 39 characters from Super Street Fighter® IV: Arcade Edition and its core system mechanics in order to achieve the most balanced Street Fighter ever. In addition to the action-packed new content and the finely-tuned rebalanced gameplay, the new version features a host of new features and modes that are sure to test even the most well traveled world warrior.

Capcom Pro Tour
The Capcom Pro Tour (CPT) is the premier league destination for competitive fighting games. Featuring the latest flagship title of the legendary Street Fighter series, the CPT brings together players and spectators from all over the world to share their love of gaming. With over a dozen official events, and even more independently run tournaments involved, the CPT showcases the very best that competitive gaming has to offer. Players from across the globe will battle through a yearlong tournament circuit in order to claim one of the 16 qualification spots for the year end Capcom Cup. There are three main types of events: Premier Tournaments, Ranking Tournaments, and Online Tournaments. Premier events, where players can directly qualify, combined with a point ranking system to decide the other remaining spots, will ensure only the best of the best make it to the end.