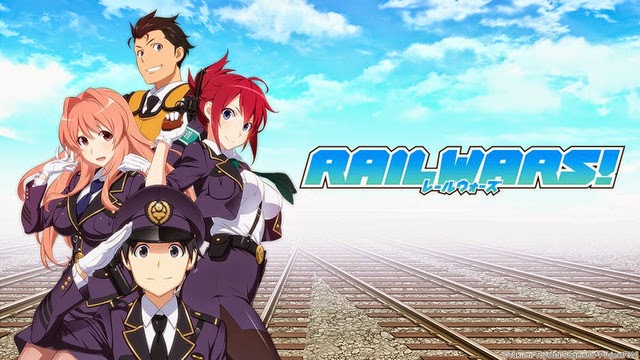 Sentai Filmworks is on a roll! Another new series that JUST started airing in Japan, Rail Wars, will be available "soon"!

In a world parallel to our own, Japan’s national train system is united under the illustrious Japanese National Railways. High schooler Naoto Takayama is one of many who dreams of someday becoming a driver at the JNR. When Naoto manages to snag a job as a trainee for the Railways Security Force, he thinks he’s finally on the fast-track to success. However, Naoto’s expectations are quickly derailed when he finds that he has trouble telling who’s crazier- his coworkers or the criminals he’s supposed to catch! But when RJ, a shadowy group with sinister motives, appears to seize control of the JNR, it’s up to Naoto and his motley crew to get things back on track. Will Naoto and the rest of the Railways Security Force be able to pull the brakes on RJ’s scheme, or will it be the end of the line not only for their team, but the entire JNR as well?

Rail Wars! will be available soon through select digital outlets with a home video release to follow.