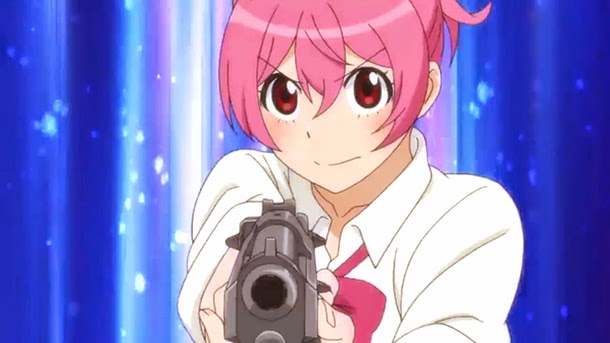 This series has JUST started airing in Japan, and since I'm not a big manga reader, I don't know much about it outside of the press release I received, but am interested...

Life can be hard… especially when it’s your first day at a new school. Will people like you? What do you wear? It’s all up in the air and expectations are high to make the right choices. Above all, you certainly don’t want it to be boring and monotonous. And that’s exactly where we find transfer student, Momoka Sonokawa. To make matters worse, she gets harassed on the train on her way to school. So, imagine Momoka’s delight when a dashing senior from Aogiri High unexpectedly saves her from the throes of a creepy old man. Her hero has brains, brawn and a Beretta! This, at least, makes the sting of being forced to join the school’s Survival Game Club all the more easy when her hero fatefully turns out to be Miou Ootori, its President! What might sound senseless, impractical, and a little insane compared to the “normal clubs” also sounds like an exhilarating romp as these babes with bullets learn rappelling and paramilitary training in what could be called Survival of the Misses! Prep yourselves as Momoka Sonokawa must learn the beauty of battle from a bevy of beauties as action and shoujo collide as the girls of Aogiri High School come out with guns blazing in Sabagebu! - Survival Game Club -!