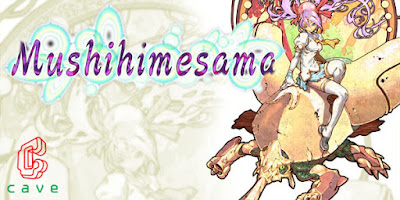 If you are a fan of bullet hell type shmups, then you should know CAVE. They have been making arcade and console shmups for years, and now are going to start releasing them on Steam! Starting with Mishihimesama, or "Bug Princess", PC gamers can finally see what everyone else has been talking about!

Read the full PR after the break
From Degica and CAVE:

MEGURO KU, TOKYO, JAPAN - Sept 17th, 2015 - CAVE Interactive CO., LTD. is proud to announce their first Steam game! In Winter 2015, CAVE will release the famed vertical shooting game, Mushihimesama! Originally an arcade game, this is the first time that Mushihimesama has been available outside Japan in it's original format.

Mushihimesama (“Bug Princess” in English) is a vertical shooting game set in a beautiful fantasy world. Huge insect-like creatures called Koju roam the forest outside the village of Hoshifuri. When Reco's people fall to a mysterious sickness, the young princess decides to leave the village and meet the God of the Koju, who may provide a cure. Riding her faithful Golden Beetle friend Kiniro, Reco must traverse the wilds, braving the hostile landscape and the aggressive Koju beasts on her journey through the Shinju Forest.

With its lush, vibrant graphics and the capability to generate thousands of bullets on screen at once, Mushihimesama is a sensational game that creates a strong visual impression. Weaving through the game's masterfully designed shot patterns is terrific fun and differentiates Mushihimesama as one of the best examples of the bullet hell subgenre. Mushihimesama's iconic characters and natural settings are also novel in a genre dominated by militaristic themes.

● Explore a beautiful fantasy world rendered in stunning HD sprite graphics. 5 stages,
including an arid desert, lush forests, and a serene underground cave.
● Many different game modes, including:
◦ Normal Mode: A faithful port of the original arcade version. This is the first time
that the original arcade version has been localized outside Japan.
◦ Arrange Mode: A remixed version of the game with different enemy positions and
shot patterns for a completely new experience.
◦ Novice Mode: A version of the game tuned for newcomers and relaxed game play.
● Most of the game's modes can be played in multiple difficulties, from the newbie
friendly Original to the notoriously difficult Ultra, which has a reputation as one of the
most challenging games of this type.
● Energetic soundtrack by famed composers Manabu Namiki and Masaharu Iwata.
The soundtrack will be available as a DLC.
● Online leaderboards and downloadable replays allow you to share your games or
check out the top scores.
● DLC: Mushihimesama 1.5 will be available as DLC. This is another remixed version of
the game that was previously available only to a select few players who had
first-edition copies of the Xbox 360 version, but is now presented to the general
Steam audience.

More CAVE games will be coming to Steam soon too!
Stay tuned for an interview with CAVE’s famous SHMUP Director Tsuneki Ikeda at the Tokyo Game Show on Sept 20th, 2015. The interview begins at 14:00 JPT on the
Tokyo Otaku Mode channel: http://www.youtube.com/tokyootakumode

About CAVE:
Formed of former members of Toaplan and often considered its spiritual successor, CAVE Interactive CO., LTD. is a Japanese game company primarily known for it’s bullet hell shooting games, both in the arcade and on various game consoles. Famous works include the DoDonPachi shooting game series, and more recently, the Deathsmiles series.

About Degica: Degica is a Tokyo-based publisher specializing in localizing Japanese games for the global market. We're best known for the RPG Maker franchise, Skyborn, Crimzon Clover, Manga Maker ComiPo!, and Phantom Breaker: Battle Grounds. Our goal is to bring you the best games from Japan and all around the world!
http://www.degica.com/
Cave Degica Mushihimesama PC shmup Steam