Attack on Titan: Part One 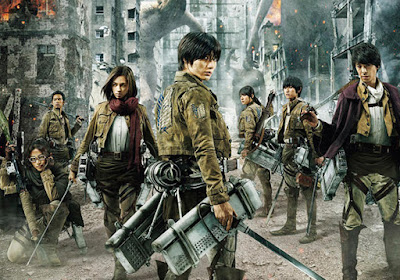 Those were my first responses within the first 20 minutes of the movie. Fellow Readers, I'll try to keep spoilers to a minimum and if I am going to reveal something, I'll let you know but my good god this movie is hard to talk about without spoiling.

Now my only knowledge of Attack on Titan is the anime, I have not read the manga so I'm not sure what they've changed from there but man did they change a lot from the anime. Not only did they change the ethnicity of most of the characters, some are just plain gone. Also, hair color has been changed. It's such a simple thing that people say "It's just hair, It's not a big thing." If it's not then why you gotta change it!?.....sorry I dislike it when a character has a distinct feature and they change it.....big pet peeve. 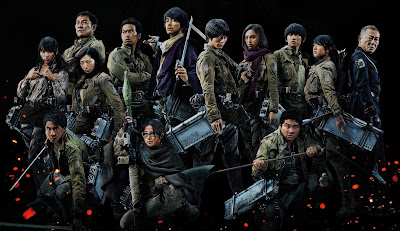 Not only are those changed but a lot of the story arc was changed as well which for me is a big downer. I wanted to see what I saw in the anime, in real life. I was gravely disappointed in that aspect but a friend told me he liked that they changed it because if it was the same as the anime then why make a movie? For me it's like a book, you read it and imagine it but when they make a movie out of it, do you want them to change it just because you've already know the story arch from the book?

Everyone has an preference but I would of liked to see the same story arch in live action. I didn't like how the movie had more of a sexual nature. There were some moments that felt unnecessary, I think it was mostly for a shock factor. Along with the gore, they did not skimp on the blood I can say that much but I felt the goriness gave it a realistic feel. 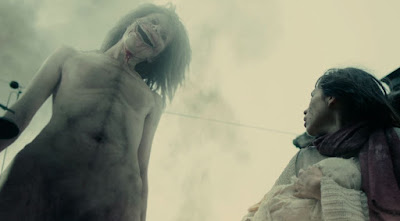 Now speaking of realistic, those titans.....I have mix feelings about them. On one hand they do seem real...and creepy....and gross, the adjectives could go on and on but they made me laugh at how unrealistic they looked and how goofy their faces looked. It was about as much as you could expect from the way you see the titans in the anime translated into real life. They look ridiculous. Whether that's good or bad is a matter of personal opinion.

In the end my friends and I had a good time watching this movie, we laughed, we cringed and then we laughed again.

Would I pay to see it again? No.

Would I watch it on Netflix with someone that hasn't seen it? Oh yeah!