Sega Releases Sonic 2 And Hardware Based Themes For The 3DS!!! 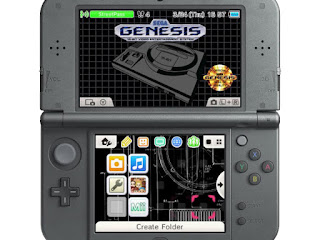 Today, US 3DS gamers get a chance to play Sega's latest 3D Classic, Sonic The Hedgehog 2 AND new 3DS themes based on classic Sega hardware! Sega Genesis and GameGear themes are available NOW with other hardware variants coming in the next few months, ending with the Sega Dreamcast theme!
Update: The Genesis theme plays the Sega CD title screen music and says "SEGA" when you start an app, like many of the genesis and Sega CD games from Sega did in the 90's!

Read more after the break!
From Sega:


Sonic, Tails, and Chaos Emeralds Blast Their Way onto Nintendo 3DS in 3D Sonic the Hedgehog 2
SEGA Begins Releasing Nintendo 3DS Themes Based on Legacy Hardware, Sega Genesis and Sega Game Gear Themes Available Now
LOS ANGELES - Oct. 8, 2015 - In his second outing, the Blue Blur had to once again face the evil robotic forces of Dr. Eggman and recover the stolen Chaos Emeralds. But with the situation growing dire, Sonic is joined by Miles "Tails" Prower, for the series-first co-op play. And the best part? Beginning today, players can return to the greatness of the Sega Genesis classic on Nintendo 3DS™ with the release of
3D Sonic the Hedgehog 2 as the latest installment of the faithfully recreated SEGA 3D Classics!  Like other 3D classic titles before it,
Sonic the Hedgehog 2 will receive extensive 3D conversion and faithful recreation of the game's sounds and music for a $5.99 digital download on Nintendo eShop for Nintendo 3DS. For more information about recreating the game on the Nintendo 3DS, SEGA Games Producer, Yosuke Okunari and M2 President, Naoki Horii recap the entire process in depth on the SEGA blog.
What was it about Sonic 2 that made it so great? Let us recount the ways:
We could go on for pages, but we won't because you can go play it now!
And because Sonic 2 was one of the breakout hits for both the Sega Genesis and Sega Game Gear, Oct. 8 also marks the launch of the Sega hardware Nintendo 3DS themes in the Americas, with the Sega Genesis and Sega Game Gear hardware themes being the first available. Featuring imagery and sounds of the legendary systems of yore, now anyone can adorn their Nintendo 3DS system with their Sega console of choice. The Sega Genesis and Sega Game Gear are just the tip of the iceberg though; the following hardware themes will be released in the coming months. (This list corresponds to the release order as well.)
The hardware themes will be $1.99 each and the Sega Genesis and Sega Game Gear themes are now available in the Nintendo 3DS Theme store. The themes will be available in Europe as well, but the release timing will be different from the above schedule.