The Vigilante Diaries Is Back As A Feature Length Film! 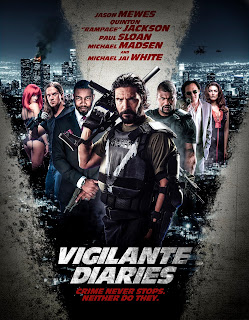 If you have been on this site for a bit, you may or may not remember "The Vigilante Diaries." Initially released as 2 webisodes on the now defunct Chill.com, I was a huge fan, so I was initially disappointed that 1: it didn't make it's crowdfunding goal to continue the series and when 2: Chill.com went under. While I know Christian Sesma and Paul Sloan were hoping to bring it back, I have heard nothing more in a long while. So consider me surprised AND excited when the PR landed in my inbox about a feature length movie being screened later this week!

Well, enough fanboying out, full press release after the break

Los Angeles CA (February 1, 2016)— On Thursday, February 4th, Oscar Gold Productions and CineTel Films hosts a gala industry screening of director Christian Sesma’s high-octane indie actioner VIGILANTE DIARIES at the Arclight Cinemas, located at 6360 West Sunset Blvd in Hollywood. The invitation-only screening features a number of the principal cast in attendance. Red carpet arrivals are at 6:30PM; the screening begins at 7:30PM and a reception follows the screening at Lure Nightclub at 1439 Ivar Avenue, Hollywood, CA 90028. Cinetel Films will then screen VIGILANTE DIARIES at the European Film Market in Berlin on February 11th. That screening takes place at noon at the CinemaxX 16, Potsdamer Strasse 5, 10785 Berlin (use Entrance Voxstrasse).

VIGILANTE DIARIES revolves around a team of black-ops agents turned crime-fighters, led by an elusive, brooding anti-hero of near-mythical physical and weapons skills, known only as “The Vigilante” (Sloan). Abandoned by governments, corporations and his handlers and with a bounty on his head, The Vigilante’s jam-packed missions of rescue and revenge take the audience from the mega-mansions and underbelly of Los Angeles to seven farflung locations on three continents, including: Yerevan (Armenia); London; Glasgow; Moscow; and Mexicali.

The film introduces a cast of colorful, dangerous, and hilarious characters. Mewes plays Beverly Hills documentary filmmaker Michael Hanover, who records the exploits of The Vigilante and is thrust headfirst into his subject, becoming a high-value target himself in the process. Mix in a trio of Asian femmes fatales, a cadre of ruthless Armenian mobsters, and at the top, a pair of deep cover super-spies hell-bent on throwing the world into chaos. Now it’s up to the Vigilante to sort ‘em all out. With no shortage of blood, gore, sex, and firstperson shooter action sequences, VIGILANTE DIARIES is what action and adventure fans, hardcore gamers and graphic novel and comic readers who like everything from DEADPOOL to SIN CITY have been hungering for.

VIGILANTE DIARIES began as a web series that premiered at the San Diego Comic-con and ran on Machinima's digital channel through a partnership with the WME-owned Chill.com. Sesma and Hatton used the original series to sell Executive Producer Asko Akopyan on the picture and incorporated short clips of it into the final film as an origin story.  Hatton says, “I saw the original web series and knew it could be expanded.  It's second time I've taken a web series and turned it into a theatrical release. The concept of an action comedy set in a dark, gritty and hyper-violent world was appealing to me.”  Sesma remembers, "VIGILANTE DIARIES began as crazy web series that Paul Sloan and I did between other projects. To see it now, as a studio-quality action film that is part KILL BILL, part MISSION IMPOSSIBLE that was done with a very limited budget is exciting. VIGILANTE DIARIES is my third feature coming out this year and it's definitely the one I believe will be a huge break out.”

Akopyan, an Armenian American,  added, “Sesma's passion and Hatton's abilities compelled me to come on board. Plus, I had the opportunity to showcase my heritage and culture as well as introduce Armenian star Arman Nshanian to American audiences.” Filming in Yerevan included historic sites including a 900 year-old church and an elaborate “Bourne Identity” style Eastern European car chase. VIGILANTE DIARIES is the first major English-language film to be shot in Armenia.

Foreign and domestic sales rep CineTel films reports brisk advance sales ahead of European Film Market, where buyers will be able to see the film for the first time. They’ve reported sales to pay TV in Asia; India; Japan; The Middle East; The Philippines; Portugal; South Korea; The UK; Turkey and Vietnam.

“I saw a rough-cut of the film and thought it had a lot of potential, recalls CineTel president Paul Hertzberg. I think Christian’s very talented and put in a tremendous effort with a very high production value.” CineTel invested in the film and acquired all domestic and international sales rights.  Cinetel Films’ Stephen Gary and Jody Cipriano will be selling VIGILANTE DIARES in Berlin at:  Martin-Gropius-Bau, IFTA Pavilion, Stand #153.
The Vigilante Diaries Vigilante Diaries