Quick Review Of The IDrive One 1TB WiFi HDD 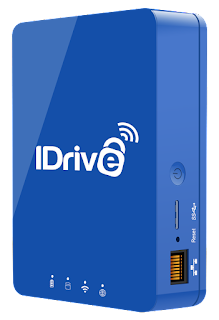 So a few weeks back, Cnet had posted a promotion for IDrive that included a year of service AND a 1TB WIFI USB 3 HDD for $34.50. Well, already using a similar device, a Seagate Satellite 500GB (1st revision), I figured I'd try it out. While ordering was quick and easy, everything else was.... silent at best.


I placed my order on August 9th. Like I mentioned previously, it was quick and easy. They were even quick to take payment! August 10th my card was charged.The a week went by without a word from IDrive besides "Hey, you haven't logged on and started backing up yet" and the confirmation email on the 9th until August 17th when I received a support ticket.

So, on August 30th, I received my drive, in the mail, in it's box and USPS' flimsy, barely padded envelope. If you're keeping count, that's 21 days, with only original confirmation and a "support ticket" as the only bit of actual communication.

So, let me give some positives about this. It was a $35 USB 3.0 drive with 2.4Ghz and 5Ghz B/G/N WiFi. It weighs almost nothing. It does have WiFi pass-though, so you can connect it to your home WiFi to access over your home network and provide internet access to anyone connected to the IDrive. It has Samba access and a built in DLNA server to stream your movies, pictures and music. You can also plug it into your LAN directly, avoiding WiFi all together. It also comes with a 5V, 2A power adapter and a short USB A to USB 3 Micro cable.

The downside, besides the company's lack of communication? 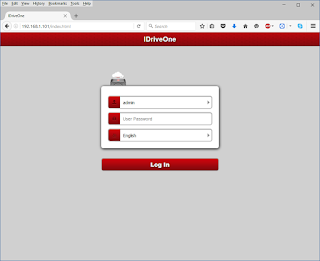 Let's start with the red and grey color scheme.

Then, let's follow it up with the "Apple" inspired icons on the main menu. 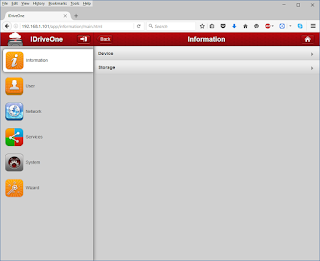 And then the settings screen.

The user experience is something many companies put a lot of effort in, and for good reason, As it's something the consumer has to work with the whole time they are working with the device. While for most people, it's pretty straight forward, for others, it may seem a bit overwhelming, especially since the documentation was pretty sparse on info. Also, since this is a mechanical drive (did you expect a 1TB SSD for $35?) if you want to use it plugged directly into your computer, make sure your USB port can supply the right amount of power, or all you'll get is clicking.

There is an IOS and Android app available as well, but I am one of 5-6 people that uses a Windows Phone, so I haven't had a chance to test that out. I did copy about 3GB in musing from a Synology DS214+ to the IDrive via 802.11N and transfers jumped between 430KB/s to just shy of 6 MB/s according to Windows 10 (My PC and Synology DS214+ are wired into my router via gigabit) so it's a bit faster than my 4-5 year old Seagate Satellite.

I have yet to open the IDrive, so I have no idea what make/model drive is being used, who the OEM of the enclosure is, or if the drive can be swapped out at all (an SSD sounds awesome), but maybe I will in a few weeks if I get bored.

Is it a good product? That depends. If you are tech savvy, this will be no issue to setup on your network and use it as a DLNA server or sort of like a NAS. If not, then this would probably get the bare minimal use. The IDrive is made with a flimsy plastic enclosure, with 4 bright white LEDs and the IDrive logo lights up as well.

So at $35 with a year of service isn't too bad, but reading the forums doesn't give the best endorsement of the actual service. I will probably not use the service at all and will just cancel it and keep the drive. On the "hopefully" positive side, it is firmware upgradable, and if my Seagate Satellite is any indication on what the community can produce, maybe someone, somewhere is already hammering away on someway to make this a much better experience.

If you are interested, you can find for info at https://www.idrive.com/one/ and who knows, you may have better luck than me.